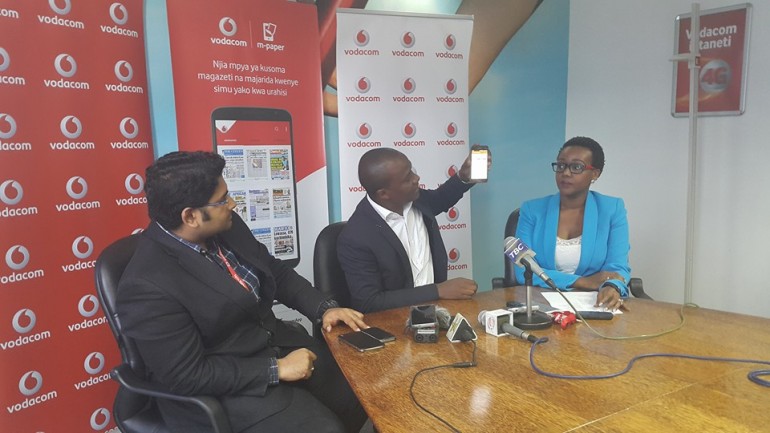 Dar es Salaam, Monday, June 20, 2016. As part of its mission to digitalize Tanzania, Vodacom Tanzania has today announced that all smart phones including iOS and feature phones can now access its M-Paper platform that allows its customers to read newspapers and magazines on their phones at nearly half a price.Previously the M-Paper application could only accommodate Android phones.

With M-Paper, Vodacom Tanzania is aiming to digitalize the way of accessing information in real time by enabling people to read any newspaper and magazine of their choice from first to last page at their fingertips at anytime.

The application, which was developed by Smart Codes in partnership with Vodacom Tanzania can be downloaded for free on any App store or the web platform mpaper.vodacom.co.tz

After downloading the app,selected newspaper or magazine one chooses to read can be paid for via M-Pesa or airtime, while for those outside the country can pay for the service with their debit or credit cards.

“Vodacom Tanzania has once again managed to use innovation to simplify life of Tanzanians with the introduction of this incredible platform. Once you download the M-Paper app on your phone you can read all your favourite newspapers at half a price anywhere all you need to do is download the app in your phone,” said Matina Nkurlu, Vodacom Tanzania Public Relations Manager.

He said the app now has more than 52 newspapers and magazines which people can choose to read at nearly half a price of the hardcopy and even cheaper if they opt to buy via daily, weekly or monthly subscriptions available.

For his part, Smart Codes Chief Executive Mr. Edwin Bruno said they decided to partner with Vodacom Tanzania to develop the M-Paper app after seeing how much Vodacom has been thriving in applying technology to provide solutions and give their customers the best services.

“We live in fast paced world where technology  has changed how we do things- almost everything being digitalized, therefore, our partnership with Vodacom Tanzania to develop the M-Paper app and make the service available to all smartphones is our way of using innovation to better the flow of information,” said Mr. Bruno

Vodacom Tanzania Limited is Tanzania’s leading cellular network offering state-of-the-art GSM communication services across the country.  It was launched in 2000 and is a subsidiary of Vodacom Group (Pty) Limited, South Africa, which is a subsidiary of Vodafone Group UK. Mirambo Ltd. is a minority shareholder.

Vodacom is the market leader in Tanzania and has introduced many firsts in the market. One of the most popular is its M-PESA money transfer service with close to 7 million active users.  This total payment solution does not require users to have bank accounts – an important consideration inTanzania where millions of people do not operate bank accounts or do not meet the minimum qualifications to open an account. With M-PESA, Vodacom customers can deposit up to TShs 5m/- for free, send and receive money and withdraw cash from any agent in the country. They can also access their bank accounts from the comfort of their homes.  M-Pesa’s reach is further augmented by over 85,000 Mobile Money agents across the country.

Over 500 organizations have integrated their payment systems with M-Pesa for collections, disbursement and distributor services. M-Pesa was enhanced last year to include a saving facility – M-Pawa. Over 1.5 million customers have subscribed to this service with Tshs 6.8 billion/- retained in deposits and over Tshs 500 million/- disbursed in loans every month.

M-Pesa is integrated with 26 banks in Tanzania and was declared a Super Brand in 2013.

Should we put media behind every content or is it exclusive?